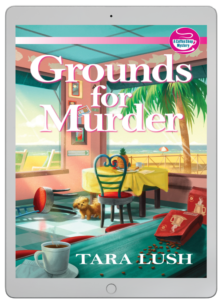 Barista Lana Lewis’s sleuthing may land her in a latte trouble as Tara Lush launches her debut mystery series.

When Lana Lewis’ best — and most difficult — employee abruptly quits and goes to work for the competition just days before the Sunshine State Barista Championship, her café’s chances of winning the contest are creamed. In front of a gossipy crowd in the small Florida town of Devil’s Beach, Lana’s normally calm demeanor heats to a boil when she runs into the arrogant java slinger. Of course, Fabrizio “Fab” Bellucci has a slick explanation for jumping ship. But when he’s found dead the next morning under a palm tree in the alley behind Lana’s café, she becomes the prime suspect.

Even the island’s handsome police chief isn’t quite certain of her innocence. But Lana isn’t the only one in town who was angry with Fabrizio. Jilted lovers, a shrimp boat captain, and a surfer with ties to the mob are all suspects as trouble brews on the beach.

With her stoned, hippie dad, a Shih Tzu named Stanley, and a new, curious barista sporting a punk rock aesthetic at her side, Lana’s prepared to turn up the heat to catch the real killer. After all, she is a former award-winning reporter. As scandal hangs over her beachside café, can Lana clear her name and win the championship — or will she come to a bitter end?

GROUNDS FOR MURDER — Book One

Pre-order in hardcover or on ebook HERE!

This jalapeño pepper plant started out as an indo